Black roses (roses of black color) actually DO NOT exist in nature (in reality, they have a more intense deep, dark purple, maroon, or burgundy hue), but nevertheless they are often featured in fiction with many different meanings such as the "black magic", "barkarole", "black beauty" and "baccara" and death varieties of roses. Black roses are commonly found in Gothic fiction, and they represent many things. The flowers commonly called black roses are actually a very dark red color.2587411

In the 19th century, the language of flowers became popular. In this code, black roses to most people signify death, or hatred. They can also mean farewell, rejuvenation or rebirth, or the start of a drastic change. It can also mean overcoming a long harng for a war or on a journey from which he did not expect to return. An alternate meaning is 'pure devotion' since a true black rose is impossible to produce.

A red rose can often be a romantic gift, representing romance and love. Black roses are symbolic of a tragic romance. They are related to sadness that may occur in the relationship.

In the Number XIII of the Tarot Cards, the card of Death, there is a banner which death is holding that contains a white rose, symbolizing a long-standing symbol of purity, promise, and beauty. In the case of the Death card, this rose represents the promise of new beginnings. We must also take the thorns into consideration - with the promise of new hope, we may have to endure a few stinging thorns (painful ordeals) along the way. Such is the way of life. [1]

Now, the opposite of a white rose, is a black rose. This may mean the opposite of what the white rose signifies, meaning impurity or immorality, revenge, and ugliness. Unlike the promise of new beginnings, the black rose may say otherwise, as signifying no return, or no hope. Of course, no black rose is actually featured in the tarot cards

Variations of Other Flowers

When represented as another type of black flower, of which black is very rare color, it is also meant to symbolize death or mourning. Once Paul McCartney of the Beatles was seen wearing a black carnation, while all of his other bandmates (John, George, and Ringo) were wearing red. This fueled the Paul is Dead urban legend, or hoax, for those that thought that him wearing the black carnation was signifying he was dead, and therefore his surviving bandmates had made his look-alike/replacement wear the carnation to signify the real McCartney had died. 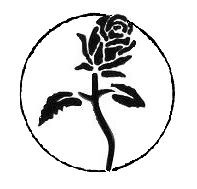 Black roses are not only a symbol of tragic romance, though. They can also symbolize death, hatred, and farewell. At funerals there may be black roses. Also, if one goes on a long journey and may never come back, they might be given a black rose as a farewell, or parting gift.

Black roses have been used in many book titles, most often romance novels.

In the Dragonlance saga, the black rose is a symbol of shame or dishonor, especially among the Knights of Solamnia. It is often associated with Lord Soth, also known as the Knight of the Black Rose. Sturm Brightblade, one of the main characters of the Dragonlance epic, was associated with the black rose when his honor was questioned, but was later remembered as one of the greatest knights who ever lived.

Amelia Atwater-Rhodes uses the black rose as a symbol of the vampires in her first few novels:

Lisa Jane Smith uses the black rose as a symbol for non-humans mostly used by vampires in her Night World series.

In the third season episode of wikipedia:Babylon 5 titled "wikipedia:Passing Through Gethsemane," there are references to a serial killer known as "The Black Rose Killer" who murdered several women and left a black rose as his calling card. This theme is further used throughout the series, always a sign that someone has placed a hit on the receiver of the rose.

In the television show wikipedia:NCIS_(TV_series), Abby_Sciuto often receives black roses from her coworkers or gives them as gifts. Also, an associate of La Grenouille, an arms dealer named Rose O'Leary, uses the alias Black Rose

In the game Fable, a black rose is a symbol of wikipedia:love, especially dark love between two villains. For example, Lady Grey, who has a heart of ice, will only fall for you if you deliver one to her. According to the game, "Only someone with a heart as black as its petals could appreciate it."

In the Elder Scrolls universe, black roses are a symbol of savage beauty and romance, though they represent realised, rather than idealised conceptions of these things. These flowers grow only on the isle of Vvardenfell and the Great House Redoran is especially proud to put them on their family crests and coats-of-arms. Although called black roses, they may range in shade and can be black, though are often ash-grey, with very delicate petals through which light may shine to produce a chillingly beautiful effect. Their symbolism in The Elder Scrolls very closely mirrors that of their actual symbolism in the real-world Goth subculture, as noted above.

In The Legend of Zelda: Majora's Mask, the most powerful sword in the game, the Great Fairy's Sword, is decorated with black roses.

In Dance Dance Revolution SuperNOVA 2, there is a song called Unreal under the artist name of "Black Rose Garden." It talks about superstition and the unnatural. The song also includes an animated background video with a dark/gothic color scheme and black rose petals.

In The Sims: Superstar, "obsessed fans" of famous Sims will occasionally leave black roses on their doorsteps. The roses may be used as spell ingredients in the subsequent expansion, The Sims: Makin' Magic.

In Nightcaster, the main character's "love interest" (and a key character to the plot) is Madelyn, the Black Rose of Perth, a Joan of Arc like figure who rallies the people to defeat the evil Nightcaster, but ultimately succumbs to his chaotic and corrupting influence, becoming his avatar in the climactic final battle. Her armor and weaponry were decorated in a black rose motif.

In MySims, black roses are available.

In the anime series Revolutionary Girl Utena, which is heavily concerned with the symbolism of roses, the black rose represents the dark side of a person's soul. The Black Rose Duelists are the friends of the series' protagonists who have been turned against them by their ignorance, selfish desires and passions that were carefully amplified by a mastermind psychologist, a student named Souji Mikage.

In the anime series Ranma ½, Kodachi Kuno, sister of Tatewaki Kuno is nicknamed 'Black Rose'. She is an arrogant, childish, cunning, and occasionally psychotic young girl who often has black rose petals trailing behind her as she leaps.

In the anime series Sailor Moon, Tuxedo Mask uses red roses as a weapon (and white ones when he's posing as the Moonlight Knight at some point), but while he is under the control of Queen Beryl, one of the series' villains, his roses turn black.

In the anime/manga series ".Hack", one of the female characters is named BlackRose. She is a video game avatar (visual representation) of a human girl (Akira Hayami) in the game "The World".

In the anime series Saint Seiya, the gold saint of Pisces, Aphrodite, uses black roses aptly dubbed the "Piranha Roses" to attack and kill his adversaries.

Akiza Izinski of Yu-Gi-Oh! 5Ds is also known as the Black Rose Duelist.

In the anime series "Ouran High School Host Club" the character Nekozawa of the Black Magic Club is often shown with black roses around him, signifying his dark and mysterious ways.

In the anime series "Pandora Hearts", the organization of Pandora has a large rose garden in the back. The roses are favored mostly by Vincent.

Community content is available under CC-BY-SA unless otherwise noted.
Advertisement